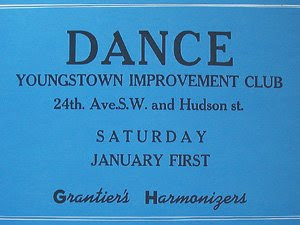 By 1914 neighbors had formed the Youngstown Improvement Club as a social group & a means for helping lift their area up to the middle-class standards of West Seattle in general. They founded a clubhouse & held many community events there over the decades. Even as a Seattle-native I knew none of this history until I began researching a new discovery: this poster which advertises a dance on January 1, 1938. Now, where are all the fotos of that toe-tappin' band: Grantier's Harmonizers?
Newer Post Older Post Home