WASHINGTON STATE'S HISTORY COMMUNITY deserves high praise for successfully rallying to save one of Seattle's most storied entertainment venues from the evil wrecking ball. The Washington Hall (153 14th Avenue) – home to over a century of music-making & dancing – will not be torn down, despite years of rumors to that effect. 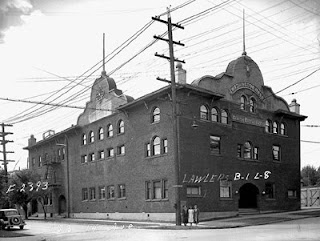 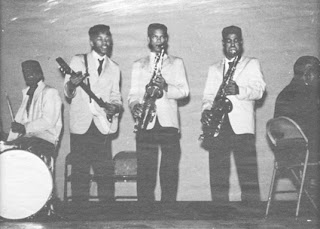 Confusion, however, has arisen in recent media accounts of the hall's travails: mistaken claims that Big Mama Thornton, Chuck Berry, & Little Richard all played the room have polluted its history, just as the dance there on February 20, 1960 (above photo by Odell Lee) by Jimmy Hendrix' teenaged R&B combo, the Rocking Kings, has repeatedly been cited, incorrectly, as the young Seattle guitarist's very first gig.
In 1973 the building was sold to a black organization, the Sons of Haiti Masonic Lodge, which began to rent it out to a variety of event promoters & organizations. As the 1970s rolled into the 1980s & the Northwest punk & New Wave movements gained traction, the Washington Hall was the site of tons of exciting shows including early ones by Chinas Comidas, Henry Boy, the Avengers,  the Cheaters, the Radios, Red Dress, D.O.A., the Look, the Dishrags, Pointed Sticks, & an absolutely legendary one by the Dead Kennedys & Ice-9 on July 7, 1979. 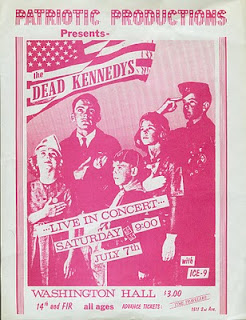 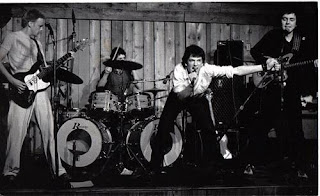 Seattle's hip-hop pioneer crew, the Emerald Street Boys, rocked the room in the early '80s, as did many more bands – right up into the Grunge Rock Era: the Void (1982), Ten Minute Warning, the Rejectors, the Accüsed, the Boot Boys (1983), Agent Orange (1985), Poison Idea, Last Gasp, Green River, Christ On A Crutch, Subvert, the Jesters of Chaos, My Eye, Resolution, the Derelicts, 13 Hilacopters, Cat Butt, Seaweed, Gas Huffer, & the Gits. With all that great history – and much more – behind it, the Washington Hall received City of Seattle Landmark status in 2009, and then with a generous grant from the Washington State Historical Society, and another from King County's 4Culture arts-preservation agency, the Historic Seattle organization was finally able to seal the $1.5 million deal. Next month – on May 1, 2010 – the refurbished hall will host a "House Party" to celebrate its revival.
Newer Posts Older Posts Home
Subscribe to: Posts (Atom)