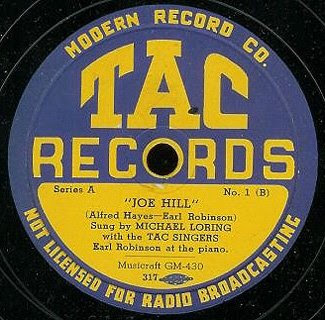 TAC RECORDS? That's right: Not Tacoma Records, & not Sea-Tac Records. TAC Records was the politically progressive New York-based label that in 1939 issued this 78 rpm disc of Seattle's labor songster, Earl Robinson, & his famous 1936 tribute tune, "Joe Hill." Perhaps the most widely recognized ballad penned by Robinson (& the lyricist/poet, Alfred Hayes), this song saluted the life of America's labor activist/martyr, Joe Hill, who was infamously executed by the State of Utah on November 19, 1915.

This early rendition – one of many cut over the following seven decades (including Joan Baez's high-profile 1969 version at Woodstock) – is notable for featuring Robinson's own piano-work behind the vocals of lefty singer, Michael Loring. TAC Records -- named for NYC's radical Theater Arts Committee – were produced by the Modern Record Co. (which was apparently affiliated with the Musicraft label that had issued many other cool tunes by the likes of Leadbelly & Harry "The Hipster" Gibson). As one measure of the TAC record's socio-political value, that bastion of Establishment sensibilities, Time magazine, bothered to take the time & space to diss the disc (which included "Abe Lincoln" on the A-side) as being "two crusty proletarian items" in a tacky March 6, 1939 review. 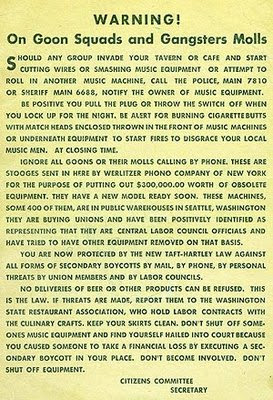 My initial guess is that the controvery may date back to around 1948 or so – when those big 10-inch 78rpm singles were first being superceded by the smaller 7-inch 45rpm singles – a change that required all-new juke boxes. The cautionary poster's details are downright chilling: "Should any group invade your tavern or cafe and start cutting wires or smashing music equipment or attempt to roll in another music machine, call the police or sheriff. ...Be alert for burning cigarette butts with match heads enclosed thrown in front of music machines or underneath equipment to start fires to disgrace your local music men. ... Ignore all goons or their molls calling by phone." It goes on to assert that various unions had been bought off; that certain suppliers of beer or foodstuffs – being in cahoots with the gangsters – might illegally try and deny delivery orders; and furthermore: that if the tavern operators allowed the original juke boxes to be switched out, they themselves would be hauled into court & sued by the original juke box contractors over financial losses. "Keep your skirts clean. ...Don't become involved..."
Newer Posts Older Posts Home
Subscribe to: Posts (Atom)