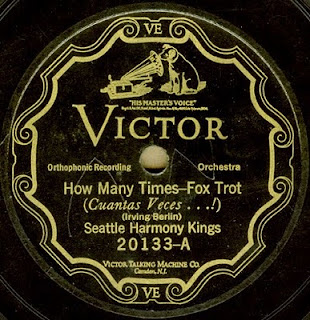 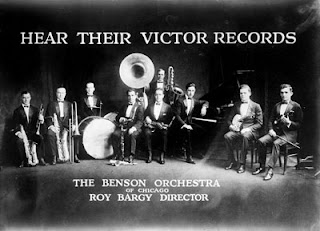 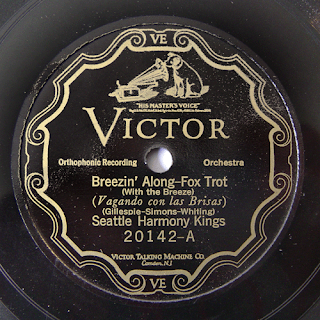 THE ONE-HIT WONDER of all time!  It was in late-1959 that a silly pop ditty – "High School U.S.A." – hit the radio waves. It was sung by Tommy Facenda – who, as one of the two "Clapper Boys" with Gene Vincent's Blue Caps, had contributed percussive handclaps to their rockabilly hits before going solo in 1958. Facenda hooked up with Norfolk, Virginia's Legrand Records who cut & released the song – which featured these lyrics: "Come Friday 'noon 'bout half-past three, I drop my books and my misery / Stroll on down to the soda shop, drop a coin in the old juke box / Lookin' around what did I see, every school kid there could ever be / They came from..."  – from there Facenda gave name-check shout-outs to various high schools. 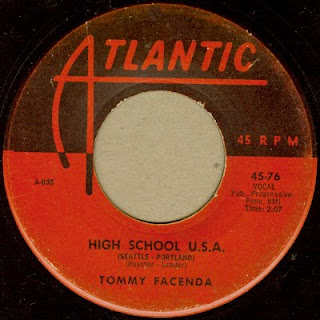 Billboard magazine decided to treat all 28 versions as one release for the purposes of tracking the song(s) on their pop chart & by combining the overall action, "High School U.S.A." reached #28 nationally. Typical for that time, the Pacific Northwest seemed so remote to the New Yorkers that they couldn't even get all the school names down right. Thus the "Seattle - Portland" version highlighted these schools:  Ballard, Cleveland, Jefferson, Roosevelt, Washington, West Seattle, Sunnyside, North-Central, Lincoln, Stadium, Grant, Blanchard, Franklin, Madison, David Douglas, Bremerton, Rogers, Benson, Queen Anne, Garfield, Highline, Wilson, Longview, Shelton, & Pendleton – some of which are even in the towns of Seattle & Portland (& far-flung places like Sunnyside & Tacoma & Bremerton & Longview & Shelton & Pendleton). Geographic inexactitude aside, the 45 became a Top-10 radio hit that autumn in Seattle & Portland – and maybe beyond.
Newer Posts Older Posts Home
Subscribe to: Posts (Atom)