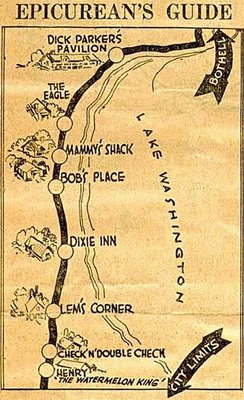 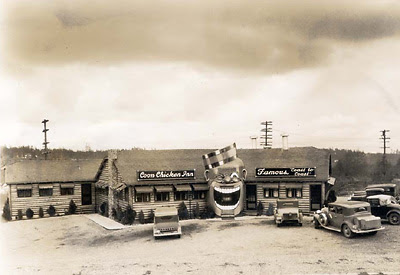 Had this 1931 map showed the area several more blocks south-ward, it would have also included the most famous, er, infamous of the town's restaurants: the regrettably conceived Coon Chicken Inn (8500 Bothell Way).

The Ferris State University's Jim Crow Museum of Racist Memorabilia informs that the chain was originally founded in Salt Lake City in 1925 by Maxon Lester Graham, who opened his second Inn in Seattle in 1929 and another in Portland in 1930 -- each replete with an absurd giant grinning & winking train porter face as entryways -- & that all three were "popular."

Well, it was certainly not at all "popular" with Seattle's African-American community (who weren't even allowed to live in the North end at that time), and who were doubly offended when uncouth local white youths started a fad based on attaching the menu's mascot image on their cars' spare tires and flaunting them all around town. 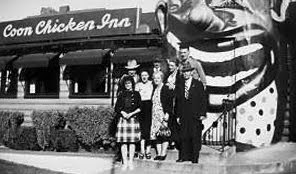 At one point -- probably soon after Prohibition's repeal in 1933 -- management added a "cabaret" (liquor bar), dance floor, bandstand, & then "Imported Directly from Chicago" the Joseph "King" Oliver Orchestra to perform in their basement's new Cotton Club which was billed as the "Largest Nite Club In Seattle." 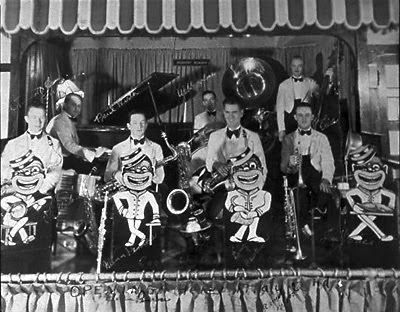 Then, as the late-1950s brought along changes, Graham leased out his property, and in time a new building -- which Ying's Drive-In Chinese Foods occupies today -- was erected on the site. 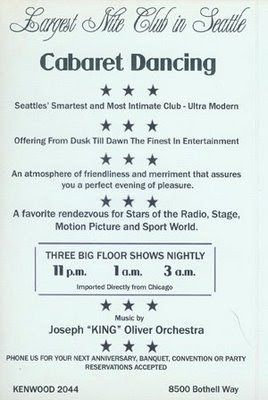