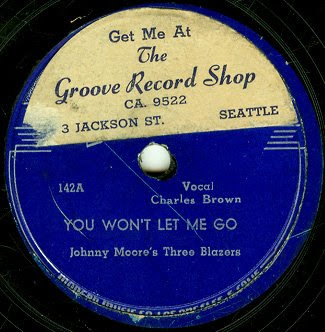 RHYTHM & BLUES records were not easy to purchase in the Northwest back in the 1940s. At that time some of the bigtime labels -- like Decca -- had their own exclusive retail stores, while other shops mostly peddled the polite pop heard on the mainstream whitebread radio stations.

And to actually buy such discs required a visit to a neighborhood store that catered to the black community -- like Tacoma's Broadway Record Shop, Portland's Bop City Records, or Seattle's legendary Groove Record Shop (1223 Jackson Street). This circa 1947 10" Modern Music Co. 78rpm disc includes "Shuffle Boogie" & "You Won't Let Me Go" by the Los Angeles-based Johnny Moore's Three Blazers. Interestingly, that trio's singer -- the soon-to-be-famous Charles "Merry Christmas Baby" Brown -- is often cited as an early stylistic inspiration to Ray Charles, the soon-to-be-famous singer/pianist who arrived in Seattle in 1948. Lastly, in 1952 Summerise bought out The Groove Shop (which had moved to 1211 Jackson St.), renamed it the World of Music Record Shop, and (while there, & then later at 1412 23rd Avenue / Jackson Street) it remained a cornerstone of the nascent local R&B scene well into the 1960s -- & a place where kids like Jimi Hendrix (& members of teen-R&B bands including the Dynamics & Pulsations) hung out and soaked up all the hip new sounds. 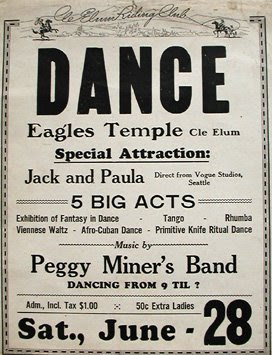