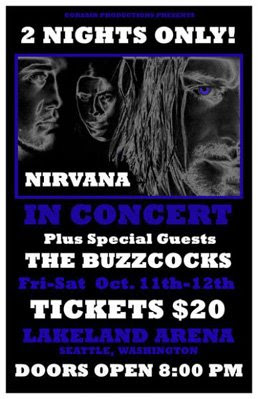 THOSE NORTHWEST grunge rockers, Nirvana, were always targeted by profiteers who cranked out "collectibles" for the band's fans to glom onto. Among the questionable items marketed over the years have been bogus concert posters issued well after-the-fact – & others representing gigs that never happened. Then there are the ones touting gigs at concert venues that don't even exist. Here is a recent example: a specimen found on eBay that purports to advertise a hella lineup of Nirvana & that esteemed British punk/pop '70s band, the Buzzcocks. The eBay listing blithely notes that: "This poster is promoting Nirvana and a show to be held on Friday-Saturday 11-12 October, at Lakeland Arena in Seattle, Washington."

Those dates correlate to a point in 1991 when Nirvana's Nevermind album was just breaking out. But the "Lakeland Arena" attribution is mystifying as Seattle has no such concert hall – although Minocqua, Wisconsin & Waterford, Michigan both apparently do! Interestingly, the Buzzcocks did actually reform briefly and serve as the opening act on a tour with Nirvana – a group which Buzzcocks guitarist Steve Diggle saluted as "the only band we considered worthy of supporting" – but those gigs occurred only days before Kurt Cobain's demise in early 1994. Oh well...whatever...
Newer Post Older Post Home