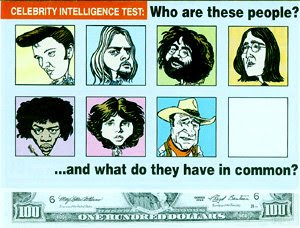 A DOZEN YEARS ago I was handed this odd brochure while strolling thru Seattle's U-District Street Fair. Now, usually I decline to accept freebies from strangers, but a single glance at it – & its cartoon images of various pop culture icons (especially of my Northwest homies, Jimi Hendrix & Kurt Cobain) – caused me to pause and grab the thing.

The graphics also included other notables (Elvis, Garcia, Lennon, Morrison, & the Duke), a bit of a benjamin poking out at bottom, & a banner offering a "CELEBRITY INTELLIGENCE TEST." That "test" was comprised of two questions: "Who are these people?"...and what do they have in common?" I was mildly intrigued...until, that is, I read the back-page's text and realized that the thing was merely an inane religious tract (produced by some California-based sect) whose fear-mongering message was simple: what those pop stars all had in common was that "They all earned big money. They are all big name celebrities...and they are all dead." Then comes the expected pitch to reject a sinful life, a final inquiry ("Why is one box empty on the cover of this tract? That's reserved for you"), & the brain-dead closer: "INTELLIGENT PEOPLE READ THE FRONT FIRST."
Newer Post Older Post Home