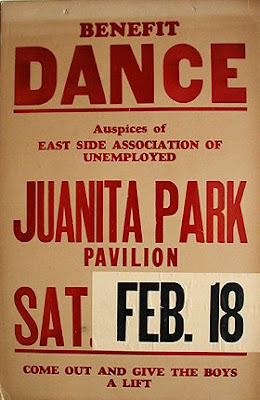 THREE YEARS into the Great Depression – & one month prior to FDR's inauguration (& the beginnings of his New Deal's efforts to turn the American economy around) – the first in a series of community fund-raiser benefit dances was mounted on February 18, 1933) at the Juanita Park Pavilion.

The events were organized by the Kirkland-based East Side Association of Unemployed – one of several area groups committed to cooperative activities intended to provide help to the growing ranks of the newly jobless. But they were not the first: one history book (by Sara Bader) records that the nation's "first Depression-era 'self-help' organization took root in Seattle... There in the summer of 1931, the Unemployed Citizens League was organized" & by year's end 12,000 members were engaged in bartering: garden vegetables for services; unwanted automobiles for free rent, etc. But one year later – and across Lake Washington –100 Kirkland-area men joined forces and began chopping firewood and planting shared gardens. Along with that hard work, were the dances held nearby at Pop Bergeron's Juanita Park Pavilion. For the entry fee of ten cents, attendees could have their spirits raised a bit by dancing to music performed by a small ensemble – quite possibly, Milt Gootee & his Band. Interestingly, on the flipside of this poster is a hand-scrawled sign that reads: "POTATOES: To Members – ONLY – of East Side ASSN of Unemployed – At 50-cts A Sacks."
Newer Post Older Post Home