THE AMERICAN FOLK MUSIC boom of the 1950s gained even more momentum as the 1960s dawned. Young new groups formed all across the land, and the Northwest saw its fair share of spirited kids singing and recording traditional tunes. Among those scoring notable recording deals were The Group (Golden Crest Records) from Olympia, the Brothers Four (Columbia Records) from Seattle, the Chad Mitchell Trio (Colpix, and Kapp Records) from Spokane, and the Travelers 3 (Elektra Records) from Eugene, Oregon. 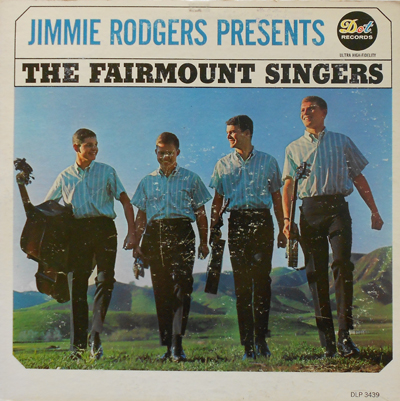 Then there was the Fairmont Singers who originally formed as high schoolers, and having been inspired by hometown heroes, the Travelers 3, they carried on into their college years at Eugene’s University of Oregon. The band’s lineup solidified as: Dave Ellington (vocals, guitar), Hal Ayotte (tenor vocals, tenor guitar), Terry Tillman (banjo), & Rob Mills (vocals, bass). In the summer of ’61 they scored a two-week gig at the famous Ice House folk club in Pasadena, California, where they struck a chord with the discerning audiences and their contract was extended to a whole month.
During that time one of the most successful late-‘50s folk/pop pioneers, Jimmie Rodgers (of Camas, Washington) – whose tunes like 1957’s “Honeycomb” and “Kisses Sweeter Than Wine” had became international hits – discovered, and then began mentoring the group. The Fairmont Singers were suddenly opening concerts and nightclub gigs for Rodgers, including a home-coming show on April 28, 1962 – the Folk Music ’62 event at UO’s Mac Court venue (with a concert at 7:30 pm, and a dance at 9:30 pm). 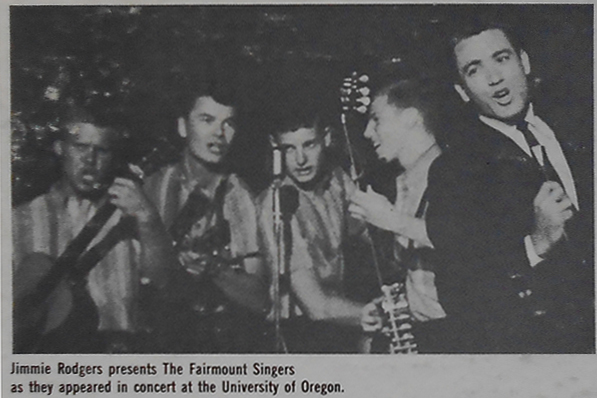 Along the way Rodgers began producing the band’s recording sessions for the same label he was currently with, Dot Records. They cut a dozen tunes – including “This Land Is Your Land” which Woody Guthrie had written during his days in the Northwest. The end result was their 1962 album, Jimmie Rodgers Presents the Fairmont Singers [Dot DLP 3439 / 25439] – which is a fairly scarce unit today. The album’s content consisted of these tunes:
Text copyright ©, 2014, Peter Blecha