SO WHERE IN THE WORLD, exactly, did these Fabulous Hammers pop up from?

Well, right here in Seattle of course – and if you would just listen to the rock band's stunning brand new disc you wouldn't be asking such silly questions.

The Hammers boast an enviably slinky '60s vibe that unmistakably harkens directly back to the heyday of the original "Northwest Sound." Talk about a regional rock 'n' roll time-warp! The original compositions contained on the Fab Ham's new 14-song disc reveal a remarkable fluency in the musical language developed in this region four decades ago by such influential local players as the Dave Lewis Trio, Frantics, Wailers, Playboys, Dynamics, Viceroys, and Imperials. Song-by-song, one can detect sly and skillful aural homages to some of the finest instrumental rock songs produced in the Pacific Northwest between 1959 and 1965. 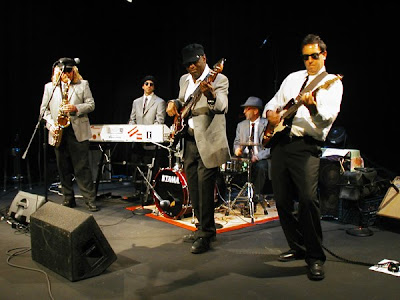 But far from just "borrowing" specific riffs or "quoting" previous hits, the Hammers instead evoke the entire musical milieu that was forged by the first generation of teenaged Northwest rockers. Laced throughout the 14-song disc are the requisite oomphs of an electric organ, the traditional saxophone squawking, the rockin' garage/jazz guitar lines (informed by innovations pioneered back in the day by aces with names like Coryell, Dangle, Nokie, Olason, and Johansen) – all anchored by reams of driving bass-work, snappy snare-drumming, and sizzling cymbals.

Such standout tunes as "Late Last Night," "4 Quarts of Soul," "Pikesville," and "Wasabi" (think "Tequila"), are no mere museum-pieces -- and, Hey: I like museums! -- or simple-minded salutes to bygone days of Northwest glory. Instead, this band is a living testament to the timeless power embodied by a regional strain of rock 'n' roll whose original moment in the sun was, shall we say, unfortunately shaded by other Hollywood-led music biz priorities (Fabian & Annette Funicello anyone?!?). Rather than attempting to recreate a long-gone day, these guys successfully resurrect the best elements of a music-form still held in great esteem by many fans -- but they do it with a modern sensibility and the full-on energy of today. Major kudos go out to the band for this Pikesville disc: Fred Slater (organ), L.A. Berger (sax), Tom King (guitar), Ronaldo (bass), and Steve Howell (drums).


Like the old saw goes: "If the only tool you have is a hammer – everything starts to look like a nail." And, man, do these pounding Fabulous Hammers ever nail it!!! 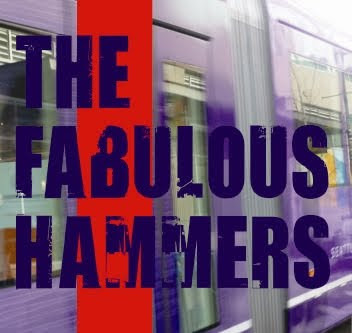 [NOTE: An edited version of this May, 2009, essay was previously published by The Bluesletter Magazine.]