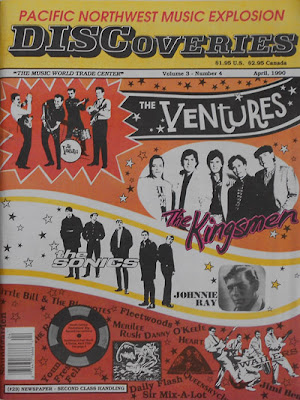 THERE CAN BE NO DOUBT but that it was those those rockin’ vinyl 45s, as issued by small independent record companies, which defined the “Northwest Sound” of the 1960s. The success of these local labels was possible mainly because of the favorable economics of marketing music in a format that was both popular and affordable.

By the 1970s the “long-play” (LP) album had long since become the industry’s standard format of choice, but it was those trusty little 45s that the emerging punk rockers, new wavers, and post-punkers predominantly used throughout the 1980s.

As we head into the ‘90s, the general public is constantly being told by corporate media that the days of vinyl are gone and we must accustom ourselves to CDs and cassettes. This may well be true. But apparently somebody has yet to relay this important message to all the small regional/local bands and their labels. Indeed: during the last couple of years vinyl output by local bands – at least up here in the Pacific Northwest – has skyrocketed in volume and the end of this phenomenon is seemingly nowhere in sight. Rumors of inexpensive CDs have remained largely that, so it is still most economical for a new band to issue their debut recordings on vinyl 45s. There has been some mighty music released recently on independent LPs in the Northwest as well.

By the mid-1980s the Pacific Northwest had garnered a worldwide reputation for its legions of heavy metal bands and their epic albums. A few of the area’s premier metal-meisters include: Queensrÿche (EMI), Metal Church (Elektra), Q5 (Polygram), Fifth Angel (CBS), Sanctuary (CDB), TKO (Infinity), Rail (EMI), Coven and Lethal Dose (Ever Rat), MACE (Restless), and Alice In Chains (CBS).

In my opinion, band for band, the best of our current crop easily out-rocks the bands from the Northwest’s sixties scene. Northwest rock has rarely been as exciting, or noisy, as it is today. And noise – grating, grinding, gloriously tortuous noise – was the element that had been missing for so long. For too many years the music had gotten soft: the tiring granola music of the ‘70s as well as the tedious power-ballads of the ‘80s.  It seems that many "rock bands" everywhere somehow forgot the self-evident truth that joyful noise itself was a crucial, if not virtually essential, aspect of real rock ‘n’ roll.

The common thread in much of the best rock music from Little Richard’s unrestrained orgiastic screams to Link Wray’s rumbling guitar amp to any Sex Pistols song you can name, is harsh, rude, noise performed with such wildness as to guarantee your old parents a one-way trip to the nuthouse.

And it is noise that is also the key to the new and recently much-vaunted “Seattle Sound.” Since about 1986, when the local metal and post-punk scenes began cross-pollinating, a certain strata of are bands have generated an aggressive and unusually heavy approach to hard rock.

A handful of new labels emerged with vinyl by the crew of rockers and immediately a whole slew of the local independent releases grabbed international attention. In no time at all major labels were scrambling to grab a piece of the action. Some of these initial signings include: Seattle’s Soundgarden with its recent Grammy-nominated LP, Ultramega OK (SST), and subsequent LP, Louder Than Love (A&M). Then there’s the Screaming Trees from Ellensburg, Washington, which has gained a wide audience with a few LPs including, Even If and Especially When (SST). And don’t forget Seattle’s other up-&-comers:  SGM’s Aggression (Medusa), Mother Love Bone’s Shine (Polygram), or Crisis Party’s Rude Awakening (Restless).

Any or all of these discs are guaranteed to knock you flat, but some of the more intriguing records in recent Northwest rock ‘n’ roll were overlooked by outside companies and are still being marketed by local indie labels. These labels have continued to fulfill their historic role as the chief producers of cutting-edge rock sounds. In particular, Sub Pop has received worldwide attention for their catalog of modern Northwest rock. While mainly perceived as promoters of grunge rock splayed by Mudhoney and Soundgarden, the label also offers the new folk-rock of the Walkabouts and the psych-garage leanings of Nirvana and the Screaming Trees. This diversity is well-represented on the 3-LP boxed set Sub Pop 200.  Also representative of the alternative scene is PopLlama Records, home of the Young Fresh Fellows, who have received growing national recognition. Known for their eccentric releases, the label's current success is a Sonics’ tribute LP, Here Ain’t The Sonics.

What follows is a brief rundown on some of the Northwest’s currently most-active rock-oriented labels and a few recommended offerings from their talent rosters. A nearly incalculable number of one-shot labels operated by individual bands also exist locally – this list is merely the tip of the proverbial iceberg. Contact these labels if you need some new Northwest noise in your life: