THIS IS THE STRANGE TALE of a Northwest rock 'n' roll 45 whose path to success – including being issued on a surreptitiously labeled disc – was perhaps like no other. It was in 1964 – amidst the exciting British Invasion (as spearheaded by the Beatles, Rolling Stones, et al) – that a Moses Lake, Washington-based combo, the Fabulous Continentals, joined scores of other American groups who enthusiastically adopted the various trappings of the limey groups in an effort to jump aboard the Anglophilic bandwagon. 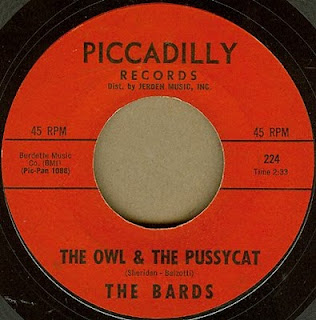 Examples of new Northwest bands who emerged at that time include: the Ascots, the Blokes, the Mersey Six, the Huntingtons, Sir Raleigh & the Cupons, King George & the Checkmates, Lord Kalvert & the Reserves, Lord Byron & the Poets, and Prince Charles & the Crusaders. Meanwhile, a few established local musicians also tried to cash-in by altering their images to appear British – such as Spokane's Runabouts (who changed their name to the London Taxi), & Seattle's popster, Billy Saint (who cut a 45 as Johnny London). Similarly, the Fabulous Continentals (who had originally formed back in 1961 to play standard fare pop and Northwest dance sounds -- like "Louie Louie") re-surfaced as the Bards. And, like some of their peer combos, the boys were now outfitted with mop-top haircuts, Carnaby Street-style garb (& sometimes even assumed fake Liverpool accents) – all intended to help them attract audiences of Beatle-crazed teenage girls.

Signed by Seattle record mogul, Jerry Dennon, the Bards proceeded to record such forgettable things as a bland cover of the Who’s “My Generation,” & a song called "The Jabberwocky." Of greater interest though, was the Bards' attempt to construct an "original" song based upon vintage writings by the esteemed 19th Century English poet, Edward Lear. And boys-being-boys the Bards took great humor from his classic 1871 piece, “The Owl And The Pussycat” – especially the lyrical zinger: “O lovely pussy! O pussy my love, what a beautiful pussy you are.”


Upon being recorded in mid-’66, Dennon issued the song as a single on his new Piccadilly label (#224). But he had greater things in mind for the band than just that & was soon attempting to license it to bigtime labels in Hollywood. The old pros down there, however, took one listen to the racy thing and instantly applied the "ten-foot-pole" rule, declining the opportunity. In particular, A&M Records wouldn’t touch it, & Liberty/Imperial Records also steered clear. But Dennon – who had already made a fortune via his label's recording of the Kingmen's controversial hit, "Louie Louie" – had good reason to believe that a mildly naughty song just might have some commercial potential. Finally he struck an interesting, & perhaps unprecedented, deal with the Beatles' label, Capitol Records. Though somewhat interested, the company was still just wary enough that they agreed to press a limited amount of the Bards' tune on records with plain white, logo-free, (but, numbered: #2148) labels – & with the understanding that if Dennon could spark some interest at radio stations, they’d reconsider issuing it on Capitol proper. 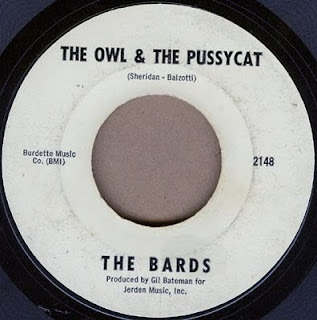 Which is exactly what did happen: the song began getting some spins & Capitol came through – issuing it with the same (#2148) release number. In the end, however, "The Owl & The Pussycat" still failed to break out beyond this region & the Bards subsequently settled down and produced a series of soft-rock regional hits though 1969.
Newer Post Older Post Home