WHAT LITTLE IS KNOWN about the young tenor banjo-playing woman seen in this recently discovered cabinet card photograph is quite intriguing. A handwritten inscription on its reverse informs only that this is: "Annie Jackson (Mrs. J.N. Pyncheon) My Mother." 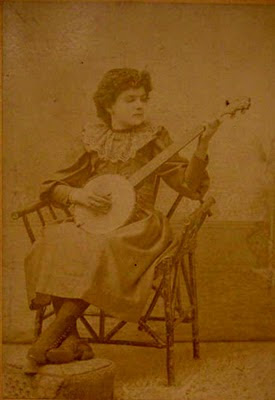 But info gleaned from the photo's credits are enough to get one's imagination roiling. The image was captured at Seattle's Roxwell Studio in the Roxwell Building (at the "Corner of Front and Columbia" streets -- today's First Avenue & Columbia Streets) on the Roxwell Block. Alas, the name "Roxwell" does not appear in Carl Mautz' authoritative 1997 tome, Biographies of Western Photographers: A Reference Guide to Photographers Working in the 19th century American West.
The circa 1880s Roxwell Building (106 Columbia Street) was, however, home to numerous notable tenants -- including Conrad Rideout, the African-American lawyer and Democratic politician who arrived here from Arkansas in 1891 -- the same year that Augustas Koch's famous illustrated birds-eye-view map of Seattle (which included the Roxwell Building) was printed by the Hughes Lithography Co. Around that same time the prominent African-American photographer James P. Ball arrived from Montana, moved into the Roxwell, and established his Ball and Sons Studio which operated there for a decade. During those early times, Seattle was still transforming from a soggy sawmill town into the bustling jump-off point for thousands of crazed gold-seekers heading up to the Alaska and Yukon Gold Rushes. Judging by her appearances alone, Ms. Jackson was perhaps more likely to be a musician who would pluck out a few old-timey hymns for her family's fireside gospel hour than entertain the leering loggers, miners and sailors swarming rough-&-tumble bars like Pioneer Square's Bucket of Blood room -- or even perhaps the clients at Madame Damnable's infamous house of ill-repute just down the block at First Avenue & Main Street. But is it at all possible that our Annie Jackson is the same one that was -- as noted by local historian Quintard Taylor in his 1994 book, The Forging of a Black Community: Seattle's Central District from 1870 through the Civil Rights Era -- listed in the 1891 Seattle Directory as an African-American music teacher?
Newer Post Older Post Home