MUSIC IN SEATTLE's public parks is a fine old tradition dating back over a century. And Seattle's favorite summertime park -- Green Lake -- has a long history of hosting musical events. 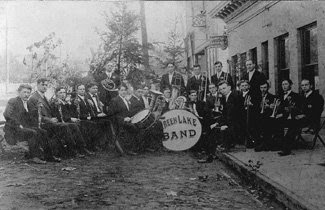 Well before myriad popular local 1980s bands rocked there at Bite of Seattle outdoor festivals (prior to being booted after noise complaints from crabby recent arrivals to the neighborhood) -- or Led Zeppelin shook (and possibly cracked) the foundation of the Green Lake Aqua Theater (5900 W. Green Lake Way N.) back on May 11, 1969, or Northwest rock 'n' roll pioneers like the Frantics and Ron Holden & the Playboys played sockhops at the Green Lake Fieldhouse in the 1950s -- the park featured plenty of musical performances & dances.

Upon recently discovering this photograph of the 21-member Green Lake Band I immediately sensed that it may have been taken in vacinity of the park. But the initial research effort wasn't too promising: turns out that one or more Metropolitan Laundry companies (the business seen at right) were located at varying locations around town over the years. But not neccessarily near Green Lake. However, this image is clearly marked as having been produced by the "Maple Leaf Studios -- Green Lake Station Seattle Wash." And, we know that a Mr. J.T. Williams operated that studio. Furthermore: business records reveal that by 1912 Williams' firm was based exactly where (304 Maple Leaf Place) the Maple Leaf neighborhood abuts Green Lake -- right there at E. Green Lake Drive N. and NE 72nd Street. This case for establishing exactly where this image was captured isn't closed yet, but the circumstantial evidence is already interesting...
Newer Post Older Post Home