IF NIRVANA'S MASSIVE MAINSTREAM SUCCESS was -- as the pundits claimed -- the ultimate validation for all the underground punk rock that had come moshing down the pike since the Sex Pistols, then the same correlation ought to be made with the mid-90's radio hits of Seattle's comedic popsters the Presidents Of The United States Of America, and that band's spiritual forebears and musical mentors, Seattle's Mighty Squirrels. 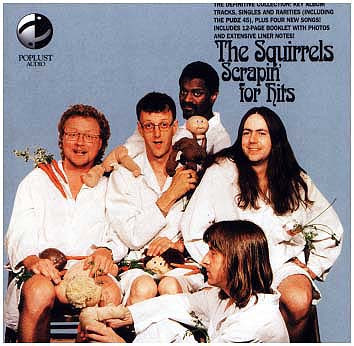 And even though the Presidents' wacky tunes may seem to be a left-field twist on the dark, heavy, sexy, "Grunge rock" that Seattle bands have come to be pegged with in recent years- that wiggy sense of humor is certainly nothing new around these parts. Although having a high humor quotient goes against certain trends in the modern post-punk world, the noble quest for goofy musical yuks can in fact be traced way, way back...

Hell, I suppose a case could be made that the humor impulse is actually a particular sub-strain of this region's rock traditions. Indeed, even some of the most revered early Northwest bands had their nutty moments. For example the Ventures' debut 45 from 1959- "The Real McCoy"- features the combo doing a bizarre "Tequila"-esque tune replete with impersonations of that beloved-but-crotchety old TV star Walter Brennan grousing about those despicable rock ‘n’ roll drumbeats. And even the Northwest's tuffest garage-rockin' punks, the Sonics, released their mindless "Village Idiot" recording circa `65. So, who sez you can't rock out and be silly simultaneously?

Certainly not the irrepressible Rob Morgan who has based his whole existence on this precept.

The teenaged Morgan fled home in Edmonds, Washington in 1977 and settled into his notorious rocker flophouse in the U-District with other human flotsam who would soon be forming seminal Seattle punk bands including the U-Men and the Look. Morgan's "first band,"The Fishsticks, were a motley crew who became infamous for throwing frozen seafood at their audience. And is if that wasn't enough, Morgan has persisted over the years with a string of bands with increasingly zany names including the Pudz, the Pamona Boners, and, for over two decades now: the Squirrels.

All of these bands featured Morgan's patented cartoon-quality vocal stylings, beyond-eclectic song repertoires, and a penchant for using costumes, dolls, bubble machines, and large-scale props in their stage shows. It has been Morgan's innate sense of the absurd that helped forge bands which managed to cross-pollinate bubblegum sensibilities with punk attitudes. His first "successful" band, The Pudz, were equal parts 1910 Fruitgum Company tributes, Alice Cooper-inspired horror rock, and black leather punk. What other way to explain the Pudz' seemingly schizoid debut 45: here was an original-yet-instantly-classic Martian Invasion Era punk tune, "Take Me To Your, (Leader)", coupled with a flipside cover of that horrid `60s pop ditty, "Take A Letter, Maria". SHEESH!

Who's in charge here? Why, Rob Morgan of course.

Anyway, The Pudz' A-side got airplay support on Seattle's first New Wave station KZAM, sold out at local record shops, and was later revived on the 1981 "Seattle Syndrome" compilation LP. All of this was quite an accomplishment considering that this modest level of success was as close as one got to having a "hit" during a period when Seattle bands couldn't score if their lives were at stake. Of course, true to the real "Seattle Syndrome", just about the time that the Pudz' tune was picked up by Rodney Bingenheimer at KROQ in LA sparking a few calls of interest from Atlantic Records, the band broke up.

Another interesting aspect of all this is that Morgan's bands' weren't alone in reviving long-lost pieces of pop trash like "Quick Joey Small" and "Yummy Yummy Yummy (I Got Love In My Tummy)". It was back around the dawn of the New Wave in the late `70s/early `80s that Seattle's U-District became the center of an offbeat, wacky school of rock as defined by a slew of fun-lovin' bands including the Frazz, the Dynette Set, the Acoustinauts, Mondo Vita, the Power Mowers, the Young Fresh Fellows, Prudence Dredge, and: the Mighty Squirrels. This then was the parallel universe where the music of the Monkees, Bay City Rollers, and Herman's Hermits was held in far higher regard than, say, Led Zeppelin, Hendrix, or Cream. Get the picture yet?

In the early `80s Morgan formed Ernest Anyway and the Mighty, Mighty Squirrels with backup by members of the new Young Fresh Fellows band. When YFF's album was touted in Rolling Stone and the guys needed to focus on their own thing, Morgan quickly recruited a few new members including veterans of the Frazz and Prudence Dredge (most notebly guitarist Joey Kline, who has pretty much been with the band ever since). Rechristening the band New Age Urban Squirrels, they quickly learned their first song- a Who-style/parody version of Billy Joel's "Just The Way You Are." OUCH!

Over the years, and with an ever-revolving cast of castoffs contributing, Morgan's ever-evolving musical vehicle was booked at clubs and concerts throughout the Northwest under various ridiculous monikers including The Squirrels Group `87 (AKA Crosby, Squirrels, and Nate), Ron Voyage and the New Squirrels, the 23 Squirrel Five, and the Squirrels Live Unit. Over the years Morgan's bands have shared the stage with headliners including Iggy Pop, The Dickies, 999, Jonathan Richman, Dread Zeppelin, the Wallflowers, Roy Loney, The Sweet, the Village People, Mojo Nixon, and the Pleasure Barons.

On the collectables front Morgan's bands have issued numerous LPs, CDs, 45s, cassettes, etc., including the psychotic "Oz On 45" disc (the b-side of which featured members of The Posies on a surprisingly straight reading of "Alone Again (Naturally)"). Interestingly enough, the record won by popular vote the 1989 Northwest Area Music Association's Best Single award, beating out competition including Mudhoney's "Touch Me, I'm Sick"...they've really done it all.

What they don’t have is a legitimate big-time hit.

This is what it has all come down to: Either the public rewards Morgan & Co. with a damn hit or else. Let's leave no room for doubt: if the band's latest CD (whatever it may be) doesn't jump-start Morgan's musical career, why he's just liable to... to... well, knowing Rob, I suppose that he'll up & record some more musical insanity just like he's always done. Whether or not Morgan finally scores as a result of his efforts is anybody's guess. What is certain is that Rob Morgan will have the last laugh.

He can't help himself: he's having too much fun...

(This essay originally appeared as liner notes to PopLust's CD.)